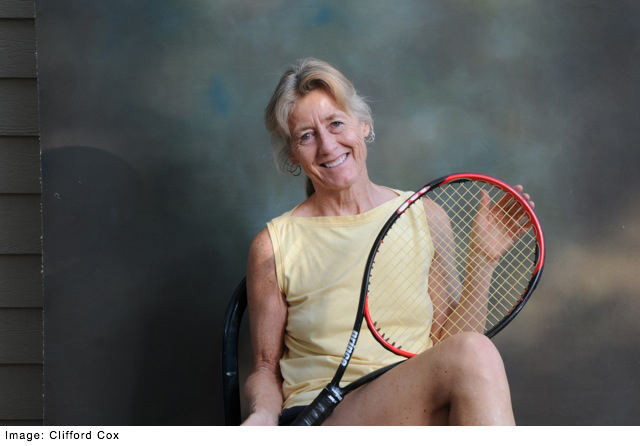 The first Gay Games were held in San Francisco in 1982, and Jill Waters competed in tennis and track. She’d already battled a U.S. Navy intent on expelling LGBT people. Waters, now 64, has attended all but one of the Games, and though her blonde ponytail is now silvered, she still strides on strong runner’s legs and cracks a hard serve. Gay Games X will be contested in Paris in August 2018, and Waters is preparing to battle new athletic opponents by facing past demons.

The first Games introduced an LGBT-friendly sports and cultural event. But marching into the stadium with fellow athletes wasn’t entirely uplifting. Waters relates, “You were proclaiming to the world you were gay. And in the ’80s, that was still difficult. That was dangerous.”

Waters had known similar fear in her Navy service. She was one of the first women to join a gender-integrated military and faced male superiors who tried to bully women out of the service on false charges.

Being gay drew added persecution. Randy Shilts’s 1993 book “Conduct Unbecoming” documents interrogations of LGBT service members under threat of imprisonment and disgrace. Waters recalls that when she arrived at a new base without prior associations, her superior told her, “I know there’s lesbians. I want you to tell me who they are. I’ll give you special favors.”

The witch hunt would later be turned on Waters despite her “walk on water” performance reviews. She feigns a deep voice to mimic Naval Investigative Service authorities who would summon her to face “stories we’ve been hearing about you.” She wasn’t dating so couldn’t be found out, nor was she selling drugs as accused. Still, she found it “very threatening” and traces ongoing PTSD to the mistreatment.

Waters tempers her account in the belief that today’s U.S. military is far more accepting, and it’s now paying for her medical care and therapy.

The Gay Games began to feel safer too and steadily flourished. By 2006, participants in Chicago numbered over 11,000 from 70 countries. Waters recalls that, “The opening ceremonies were at Soldier Field — where the Chicago Bears play. That’s mainstream.”

In 2018, her battleground has shifted home to Oceanside.

During her childhood there, Title IX hadn’t yet mandated equal access for females to school sports, but her mother was proud of Waters’ athletic talent. As the only girl on the boys’ baseball team, she was praised for her strong pitching arm.

The battle now is at the well-kept country club nearby, where Waters plays on a traditionally named “ladies’” team. Being asked why she’s never married echoes past inquisitions, so she’s still not ready to come out or have her girlfriend of three years come watch her play.

The earlier military interrogations left Waters traumatized by threatening raised voices, and that fear of conflict is another issue in her relationship. Her own voice has been plaintive, but thickens with urgency when she grasps her need to remain an outsider at the club.

“I NEED the tennis.” Concentrated training is the path to her ninth Gay Games. Waters confides, “I cannot afford for someone to say, “‘I don’t want that gay woman on my team.’”

After the Games, she can choose whether to remain a demure-sounding “lady” at the club. She’s a woman, an athlete, a veteran — and suddenly laughs with girlish glee that when she turns 65, she’ll become a “young” player again in the next age division.

But the prescribed feminine tennis skirt still irks Waters. She recently warned her team captain she wouldn’t wear one.

“The other day, the captain came up to me and said, ‘Look what I did!’ And she had shorts on.”

Follow My Life and Thymes on WordPress.com
Join 17 other subscribers